I’m sure you’re all relieved that the political ads of 2020 are behind us. From a creative standpoint it’s rare to find any political ads that are noteworthy. As a genre, they all suck. But if you can get past the half-truths and the cookie-cutter format you just might find some good marketing lessons from political advertising that you can apply to your business.

In the 2020 election one ad busted through all the rhetoric and made an impact on the advertising community. There’s a lot to learn from this spot, regardless of where you stand politically. Business owners should pay attention, because this is probably the best political ad I’ve ever seen:

Here are some of the marketing lessons from this race, and from this political ad, that you can apply to your own business:

First, you have to know the playing field.

That’s the basis for any good marketing strategy. Very few incumbent presidents in the history of this country have been voted out of office. This election was Trump’s to lose, and the Biden camp had to approach it from that perspective. It was going to be hard to win, so they had to help Trump lose it. And that TV spot fits the bill.

The “Silence Him” spot is a dramatic and accurate reflection of the marketing strategy.

Sometimes the best strategy is to just shut up. Biden’s strategy, all along, was to just let Donald Trump do the talking… the more Trump talked, the better Biden looked.

The “silence him”  spot captures that foot-in-the-mouth strategy in a brilliantly simple manner, and it seems to have resonated.

But in business you can’t count on your competitors to make high-profile mistakes. That would be an unlikely gift. So your strategy needs to revolve around authentic benefits of your own, rather than waiting for your competitors to shoot themselves in the foot.

COVID 19 was the big, game-changing issue of this election, and this spot drives that issue home in a painfully obvious way. It reminds people about the handling of a pandemic, without dwelling on the horrible reality of it.

Let others do the talking for you, whenever possible.

If you can get a third party talking up your brand, it’s much more effective than talking about yourself. That’s why testimonials, endorsements and reviews work so well. And if you can get your direct competitor to do the talking for you, that’s  better yet!

Paid ads are written off as propaganda, while press coverage of any kind is seen as somewhat credible. If you own a business and you’re not doing any kind of PR outreach, you’re missing the boat. There are many ways to get affordable online coverage these days, and it can do wonders for your online presence and SEO, if nothing else.

Don’t go on the attack unless you’re the underdog.

A big name candidate attacking a no-name, first-time challenger just doesn’t play well, especially in little local races. If you’re the established brand in your niche, you need to behave like a polished, professional leader. You need to show some honest accomplishments in your ads, instead of just bashing the little guy.

Trump’s continued attacks on Biden didn’t sway voters, perhaps because few people believed that moderate Joe is, actually, a closet communist. If you’re going to run comparison ads, you better have the truth on your side. More on comparison ads

Use the facts to your advantage.

The “Silence Him” spot is factual… it used well-know quotes that came directly out of Donald Trump’s mouth. The Biden team could have chosen an even more damning collection of off-color quotes, but they chose to stick with those that referred to the #1 issue — the pandemic. When the facts are stranger than fiction, use them! 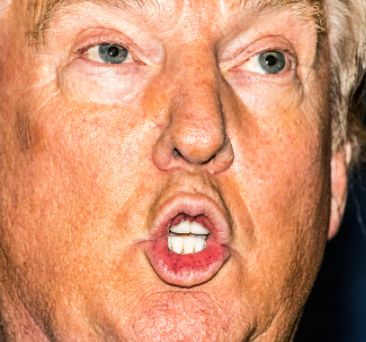 The Silence Him spot proves you don’t need a massive production budget to convey a compelling message that will move the needle for your business.

It’s not about Hollywood lights and a cast of big name actors, it’s the idea that counts. Simpler the better.

Transforming Trump’s mouth into a ballot dot was brilliant. And using simple animation made it even more arresting.

Demonstrate what you want people to do.

In this case the Biden ad demonstrates exactly what every political ad aims to accomplish… a vote for a particular candidate. Just mark your ballot a certain way.

(At some point, it looks like the campaign team decided to add the bit that demonstrates someone dropping the ballot in the drop box, just to be sure people understood that little detail. It was an obvious afterthought. The spot would have been more powerful without that.)

Omni channel media buying is the best way to get results. Political candidates still rely heavily on TV advertising, but they’re also devoting huge budgets to all the various digital channels, as well as radio and outdoor. You have to cover all the bases, or at least more than just one little social media channel.

Presidential elections are a good time to turn off your ad campaign.

All the stations, outlets and channels raise their rates when political campaigns start ramping up. Plus, the volume of noise is so deafening, it’s hard to get your message across. So you’re paying a premium for less visibility and lower click through rates.

It’s proven that in politics the fear of loss has more persuasive power than the hope of any gains. And in this general election it proved out on both sides of the political spectrum. Everyone believed they have a lot to lose, so we set new records for voter turnout.

However, negativity did not win the day in 2020. Biden’s campaign was unusually positive. Only 10% of his ads were attack ads. Trump’s campaign was simply too angry, negative and alarmist to be effective  — a second time.

A negative approach can work in business, but it’s much more complicated. It’s more like running against a dozen like-minded politicians in a primary race. There are many options, so you have to be careful about who or what you choose to attack. More on Fear of Loss in advertising)

The stakes are much higher in politics than in business.

In a general election it’s a no-holds-barred sprint to the finish every time. Winner takes all. In business it’s a never-ending marathon. You can often cruise along quite nicely with just tiny gains in market share. So pace yourself, but keep making progress. Consistency is what counts. Stopping is what kills you.

Political operatives are very good at matching the message with the market. Campaigns spend a ton of time and money sifting through the data to identify supporters, find out how they feel about the candidate, and how likely they are to actually vote. They segment audiences very carefully, and employ different language, different images, different music for every individual segment of the population.

The Biden team did another version of the “Silence Him” ad that focused on climate change. (They served that one up to younger audiences.) So don’t just use one generic ad to blast across many different segments in your digital advertising. Get focused. Slice and dice.

It’s NOT all about you.

In the 2020 race Biden, himself, often took the back seat to the various coalitions he pulled together. In fact, many Democrats were worried that he wasn’t doing enough. He was too quiet. Too modest. But his relatively low-key approach was perfectly on brand for Biden. He was never going to out-shout Trump, so wisely, he never even tried.

To me, most political ads are annoying because they sound overly negative. Dramatic voice-overs are commonly accompanied by ominous music and dark, foreboding images. Like the unseen serial killer in horror movies… always lurking.

The “Silence Him” spots didn’t need any of that. The sound of Trump’s voice, his words, and the simple, animated visual approach was much more effective. Instead of fictional fear mongering they used a matter-of-fact approach that came off as actually a bit hopeful… 75 million people were hoping he’d be silenced. Like it or not, now he is.

Great post, John! Really good insight and makes me think about my clients in a whole new way. I appreciate you outlining every detail of this campaign and how you believe it stood out among the others. It’s a whole new world of advertising to this polarized and skeptical market. Appreciate your perspective.