In the battle between right-brained marketing people, and left-brained finance people, the left brainers usually win. Our entire culture is driven by the left-brained rationalists.

They have data, spreadsheets, and the graphs to support their decisions.

We have gut instinct, intuition, experience, taste, style and emotion on our side. But we also have neurobiologists who can prove that successful branding hinges more on emotional thinking than on logic. In fact, in the three-step branding process — Gut, Heart, Head — the rational head comes in last.

“Joseph DeDoux, professor of Neuroscience at New York University says, “The amygdala can literally hijack our mind and body, causing us to respond emotionally while completely bypassing our cerebral cortex, the seat of conscious awareness.” 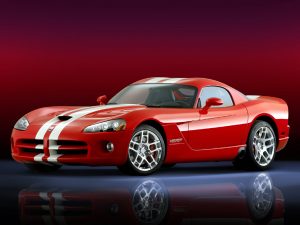 The Dodge Viper was not an analytical decision.

Bob Lutz, former CEO of Chrysler and Vice Chairman of GM, once said he vetoed the finance guys and made a gut decision to develop the Dodge Viper.

In a Harvard Business Review column, Lutz said “There were those at Chrysler who thought the budget could be spent more prudently, but those of us who looked at it from a right-brained, emotional perspective saw what the car could do for the company.”

The Viper wasn’t exactly a hot seller – only about 500 were sold in 2016, the last year of production. But the world’s first moderately-priced supercar certainly is a case study of successful branding. And there was nothing rational about it.

“The best companies balance the perspectives from both sides of the brain when making decisions. The problems occur when the left brainers wield too much power in senior management,” Lutz said.

So here are some good, logical reasons to embrace emotional, right brain thinking in your business. It really is the secret to successful branding in the long term.

1. There is no such thing as a completely rational decision.

Don’t kid yourself. Even when CEOs methodically assess every detail of raw data and attempt to be completely rational there’s still an element of gut instinct at work.

Spock-like analysis is tainted by knowledge of who did the spread sheets, where the data came from, what other, similar data they’ve used in the past, and a dozen other factors.

Humans make decisions in the blink of an eye, and every one is influenced by a hundred factors, beyond the facts.

We like to think we’re rational and fair in our decision making, but we’re not. The human brain reaches conclusions before we even know it has happened.

Before any conscious thought or choice occurs, we FEEL something. Something emotional and completely irrational. It might be curiosity. Amusement. Desire. Arousal, Or, quite possibly, repulsion. But whatever it is, it’s not rational.

So before anyone has a chance to analyze any of the facts, the adaptive unconscious has already sent a gut reaction coursing through their veins. The conscious, analytical brain doesn’t have a chance. Therefore, branding success hinges on powerful, immediate, emotional connections.

In Harry Beckwith’s book You, Inc. he says, “People don’t think, they stereotype. They don’t conclude, they categorize. They don’t calculate, they assume.”  And they do it quickly.

Malcom Gladwell’s bestseller Blink is all about that.

An analytical approach to marketing communications is inherently more complex than an emotional approach. And in the battle between complexity and simplicity, simplicity wins every time.

When the guys in the white lab coats start wagging the marketing dog, you get fact-filled ads and mind-numbing PowerPoint presentations devoid of any emotion at all. There’s no heart in it.

In the absence of emotional context, listeners/viewers/users simply check out and move on to something that does resonate subconsciously.

Say you’re pitching a new idea to your bosses, or to a group of investors. You’ve analyzed the problem from every angle. You’ve devised a brilliant solution and written a compelling argument for it, backed with tons of data. But you never get past the snap judgment.

By the time you get to slide #5 of 75, they’ve already made up their minds.

People don’t wait around for their analytical brain to kick in and say, hey, this is worth my time. That train has already left the station. The gut feeling of irrelevance has already won out, and that gut feeling is far more powerful than any most people care to admit.

So successful branding hinges on the gut.

The market research industry has revealed many useful facts over the years. But when it comes to predicting how new ideas or new products will be received, market research data often misses the mark. 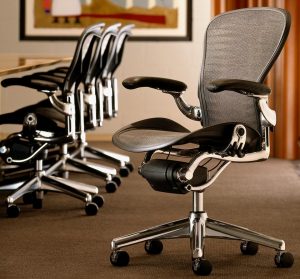 Market research could not predict the success of this chair

When the Herman Miller Company first designed the Aeron chair, all the pre-launch research pointed to a dismal failure. It didn’t look comfortable. It didn’t look prestigious. People didn’t even want to sit in it.

It became the best selling chair in the history of the company and the inspiration for countless knock-offs and imitators.

The successful branding of the Aeron chair stemmed from the gut reaction to the feeling of sitting in it. Their butts and backs were talking, which led to a love affair of customers who weren’t shy about sharing their passion.

And what about the famous marketing debacle called New Coke…

“Coke’s problem was that the guys in the white lab coats took over,” Malcom Gladwell said.

First, Pepsi launched something called The Pepsi Challenge, and proved that people preferred the taste of Pepsi over the taste of Coke.  It was a brilliant move in the Cola Wars, and it provoked a bit of panic from Coke.

For the first time in history, the folks at Coke started messing around with their famous, patented formula.  They tweaked it and tested new versions until they had something that beat the flavor of old coke in every taste test.

The executives were absolutely sure they should change the formula to make it sweeter, like Pepsi.  The market research showed people would buy it. But as Gladwell says, in the most important decisions, there is no certainty.

It’s not the flavor that sells so much Coke. It’s the unconscious associations people have with it, including the advertising, the shape of the bottle, the brand’s heritage, the childhood memories associated with it… It’s THE BRAND! 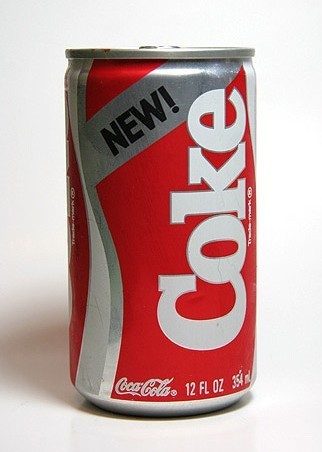 One of the all-time biggest branding failures

The guys in the white lab coats at Coke-a-Cola didn’t take the brand into account, and they could not possibly imagine the fallout.

No one knew how much Coke-a-Cola was truly loved until it was taken off the shelves and replaced with “better tasting” New Coke.

This was 1985 — way before Twitter, Facebook and blogs — and still, the company was deluged with immediate customer rants.  “How dare you!” was the overwhelming sentiment.

Sergio Zyman, CMO at Coke-a-Cola at the time, called it “an enormous mess.” It took the company only 77 days to reverse their decision, and go back to the original, “Coke Classic.”

The fact is, if the leadership at Coke had listened to their instincts, instead of just the data, they never would have done it.

Which brings me back to Bob Lutz who said the all-powerful voice of finance is a familiar enemy to innovation.

Here’s more on successful branding of the Dodge Viper

For more on the emotional side of branding, try THIS post.

“In Harry Beckwith’s book You, Inc. he says, “People don’t think, they stereotype. They don’t conclude, they categorize. They don’t calculate, they assume.” And they do it quickly.”

By the way, if Coke had simply changed the formula over night and NEVER said anything to the public about it (and done it quietly so the vast majority of employees didn’t even know about it) the public would have assumed they were drinking the “same old Coke”. Had they done this, they wouldn’t have had to pay for new marketing, new cans, etc. and the public would have like it. In fact, Coke could have then responded with a Coke Challenge and beaten Pepsi at their own game.

I’m pretty sure companies do this all the time. At some point, both Coke and Pepsi moved from using cane sugar to HFCS, but I don’t recall either one changing the packaging/marketing to tout the change… am I wrong here?

With the data-driven marketing conversation raging, I must admit it is pleasant to read the case for gut instinct. Love how you brought up Spock, he’s the perfect example. So relentlessly obsessing on logic, he misses the forest for the trees. Thanks for the thoughts John!