Is “Inspiring Bank” an Oxymoron? The Branding of Umpqua Bank

It’s interesting, where people find business inspiration. For some, it’s the pages of Forbes or podcasts with big-name entrepreneurs. For me it’s the bookstore, or conversations with clients. I don’t think anyone looks at bank branding as a source of inspiration.

Most banks are not known for their inspiring interiors or creative marketing practices. The most exciting thing to ever happen at my old bank was the emancipation of the counter pens…

They were released from their chains and replaced with crappy logo pens that are now free to take home with just a purchase of a $10,000 15-year Certificate of Deposit.

Nope. The banking industry is the last place I’d look for business inspiration or marketing insight.

That is, until I met Ray Davis, the the former CEO of Umpqua Bank.

Turns out, Davis is not inspired by bank branding either.

According to Davis, the key question driving strategy discussions at Umpqua Bank has been, “How can we get people to drive by three other banks to get to ours?”

That question has steered the bank’s team to look outside the financial sector for inspiration. For instance, Umpqua’s brand has been heavily influenced by the retail industry. “Build the branches around interactions, not transactions.”

Umpqua Bank has grown from $150 million to $24 billion in assets during Davis’ time as CEO. Today it has 350 stores in three states. But perhaps more importantly for the brand, Umpqua has been included in Fortune Magazine’s list of 100 best places to work  — eight years in a row.

Bankers and banking consultants from all over the world visit the Umpqua headquarters in Portland and the San Francisco branch to see what they’re doing and how they’re doing it. And what’s even more impressive is that executives in completely different industries are also looking to Umpqua for inspiration.

Turns out, we really can learn from a bank when it comes to branding.

So what’s behind it? What’s turned this small town brand into one of the fastest growing banks in the nation?

“Umpqua started to take off once we realized what business we’re really in,” Davis said. “I don’t believe we’re in the banking industry. We’re in the retail services business.”

When Davis applied for the job at Umpqua he warned the Board of Directors that he was going to throw out all the old conventions of the banking industry and start something completely different. Because he believed they couldn’t compete against the big guys in any conventional way.

“Banking products are a commodity,” Davis said. “You can’t differentiate yourself that way. The big guys are just going to copy any good new product we come up with. But they can’t copy the way we deliver the service. They can’t copy our experience.” 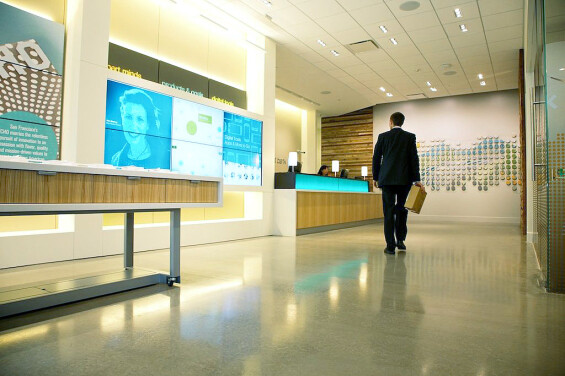 For that, he borrowed ideas from two great retailers… Nordstrom and Starbucks.

Umpqua stores look more like the lobby of a stylish boutique hotel than they do a bank. You can settle into a comfortable leather chair and read all the leading business publications. Have a hot cup of their Umpqua blend coffee. Check your e-mail or surf the web. Listen to their own brand of music and maybe even make a deposit or open a new account. Who knows.

It’s a dramatic leap when you compare that experience to the cold, marble standards of the banking industry.

Clearly, Davis knows how to execute. He doesn’t talk about “execution” per se, but he obviously has the discipline to match the vision. He’s knows how to motivate and how to manage an organization through dramatic changes. And he’s built a corporate culture that aligns with the brand promise.

• Random acts of kindness:  Local Umpqua teams just do good stuff, like buying coffee for everyone who walks into a neighboring Starbucks. They don’t have to ask permission.

• They get their customer service training from Ritz Carlton.

• Every Umpqua employee gets a full week of paid leave to devote to a local charity. That’s 40 hours x 1800 employees! Any other banker would do the math and say it’s too costly. Davis says it pays off 100 fold. That’s bank branding at it’s best.

• Proceeds from Davis’ book “Leading for Growth. How Umpqua Bank Got Cool And Created A Culture of Greatness”go to charity.

• They invented a way to measure customer satisfaction. As Fast Company Magazine put it: Umpqua Bank has a rigorous service culture where every branch and each employee gets measured on how well they deliver on what they call “return on quality.”

• They embrace design as a strategic advantage. At Umpqua branches, everything looks good, feels good, and even smells good!  It’s the polar opposite of a crusty old bank. It’s a pleasing environment, which makes an unpleasant chore much nicer.

• Davis GETS IT. He knows, intuitively, that his brand is connected to their corporate culture. “Banking executives always ask, ‘How do you get your people to do that?’ It’s the culture we’ve built over the last 10 years. It doesn’t just happen. You don’t wake up one day and say, gee, look at this great culture we’ve got here. Our culture is our single biggest asset, hands down.”

• He embraces the idea of a big hairy audacious goal. In fact, everyone answers the phone “Thank you for calling Umpqua Bank, the world’s greatest bank.”

So the next time I’m looking for inspiration, maybe I’ll skip my usual haunts and head down to the bank for a cup of coffee.

For inspiration regarding your own marketing efforts, call me at BNBranding.