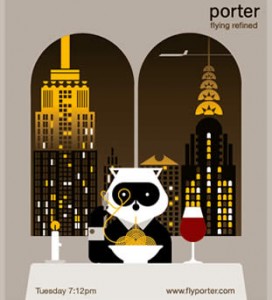 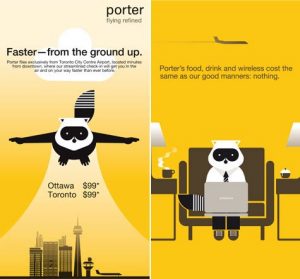 I haven’t flown Porter, but I hope to. (It’s almost enough to justify a trip to my grandma’s hometown in Nova Scotia.)

I hope they can succeed in a tremendously difficult and competitive industry. I hope they can scale up their operation without sacrificing the heart of the Porter brand. And I hope more airlines follow suit.

Branding the Olympics – leading by example in sports marketing

Having flown Porter numerous times, I can confirm that the brand promise is delivered at every touchpoint. The whole experience feels much more civilized than what passes for air travel today

I know this post is a little old but I thought I comment anyway. Because I love Porter and flying! The first time I travelled with Porter to NYC I thought I had stepped into a lounge area for first class. Their customer service is impeccable – the passenger next to me spilled her tomato juice everywhere. Including me. Less than a few seconds later the flight attendant jumped in front of my face with a Tide-to-Go spot remover.

On a larger scale, Virgin America is right up there in my opinion. They have innovative amenities that would take Porter years to reach; however, there is one thing Porter understands better. Flying doesn’t start up in the air, it starts on the ground. In any case these two brands are astronomically different. I hope Porter grows with time because it really is a universal brand when it comes to the experience. The person who spilled her tomato juice was a retired dean, while I was an aspiring consultant. And we both agreed, Porter rocked. Heck, even the Queen of England used Porter to tour certain parts of Canada. There is so much to be learned from Porter. With time, they would be a great case study for businesses who’ve lost faith in a more “refined way of flying.”

While I used to be a loyal Porter customer, in the last few months the airline has gone drastically downhill. While it is lovely to have flights that are only half full, I am beginning to wonder if the rumors about the airline going into bankruptcy might be true – Porter has canceled two of my most recent flights at the last minute, leaving me stranded. While the service is top notch, reliability is sadly sub-par – in the future I will be bypassing Porter in favor of more reliable airlines.

I am currently sitting at the Toronto airport with my husband and four children. Porter is the worst. I am very disappointed because I had heard so many great things about it. The crew in Chicago was nice. From the minute we landed in Toronto however,we have been greeted by misinformation and rude, condescending, impolite ticket agents. DO NOT FLY PORTER out of Toronto. It is not worth the free coffee and water in the lounge.

Interesting perspective. Thanks for sharing your thoughts on the subject.