How to compete in the booming Kombucha Market

Insight on the booming kombucha market — An interview with Steven Lee of Kombucha Wonder Drink. 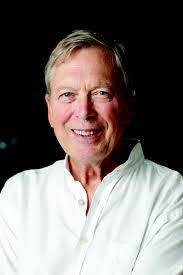 In the tea business Stephen Lee is a household name. A pioneer. You could also say he’s the father of Oregon’s booming Kombucha market.

Lee first tried the popular elixir of fermented tea on a business trip to Russia, back when the U.S. and the USSR were coldly pitted against one another.

“When I first tried Kombucha in Russia I thought it was one of the most amazing things I’d ever experienced,” Lee said. “There was no question in my mind. I knew it was going to be a phenomenon.”

So Lee brought a SCOBY back with him and started brewing his own kombucha in his kitchen. But it would be many years, and several start-ups later, before he would jump into commercial kombucha production.

I sat down with Steve to talk brand building in the kombucha market, business creativity and his long list of successful entrepreneurial ventures.

It all started with Universal Tea Company in the early 1970s with $2500 and a basement full of herbs, spices, teas and dreams…

SL: When we started Universal Tea Company back in 1972 there was there wasn’t much competition… Lipton, Celestial, Bigelow and Twinnings. We were selling bulk to natural foods stores, but we really hit on peppermint… We were bringing peppermint in from Eastern Oregon — It’s the finest peppermint in the world — and selling it in bulk. We actually bought a wheat combine for $800, reversed the airflow, got a tractor-trailer license and began processing and hauling. We sold hundreds of tons of mint to Lipton and Celestial Seasonings.

JF: How did that transition into Stash Tea Company?

SL: We sold universal Tea Company to our bookkeeper for $45,000 in 1977. It had taken us five years to figure out what we wanted to do with Stash Tea, because everything we tried failed. We finally decided to sell tea bags to the food service industry and through mail order. It was a slow build over 21 years. We did everything as inexpensively as possible.

JF: From what I heard, you had some very innovative marketing programs.

SL: Yes. We had more than 100,000 people on our mailing list. We used gifts, discounts and eventually free shipping to create loyal customers. By the late 80’s mail order accounted for 10% of our revenues, but 35% of the company’s total profits. Eventually Fred Meyer (the grocery chain) called us, and asked if we’d be interested in selling our tea in their stores here in the Northwest. So they were our first retail account.

By 1990 Stash was the second largest purveyor of specialty teas, behind Bigelow. Lee and his partner, Steve Smith, sold Stash tea in 1993 to Yamamotoyama, the oldest tea company in the world.

JF: What did you do differently after that, when you were starting Tazo?

SL: Well, we started Stash tea with $2500. Tazo was capitalized with a half a million. Plus, we had 20 years of experience under our belts. We had a lot of courage and a lot of confidence. We just marched right out there with it. We knew where to go. Who to contact. How to be creative… 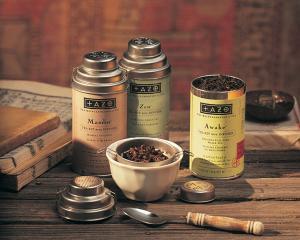 We got a very talented team of people together. The guys at the design firm and a copywriter worked with my partner, Steve Smith, and they were just brilliant together. Such a creative force!

There are a lot of people who get involved in the brand building process early on who set precedents. The name, for instance… With Stash, from the day we came up with that name, we had to back-peddle. “No, we’re not about marijuana.”

With a name like TAZO, and the right creative team, anything could happen. The writer said, “it’s kinda like marco polo meets Merlin on the crossroads of existence.” That was the beginning of the whole storyline. They pulled that one outta their hats.

Steve Sandoz, the copywriter on the Tazo project, once told a reporter that Tazo was “the name of the whirling mating dance of the pharaohs of ancient Egypt and a cheery salutation used by Druids and 5th-century residents of Easter Island.” Proof that sheer creativity can pay tremendous dividends when it comes to building a brand.

JF: It also helped that the specialty tea category was booming by the time you started. Didn’t Republic of Tea pave the way for Tazo?

SL: They certainly did. There were no longer just five or six tea companies out there. There was some real innovation happening and consumers were aware of better teas.

JF: Tazo launched with a product that cost almost twice as much as Stash. Was premium pricing a big part of your strategy, or was it just that the ingredients were more expensive?

SL: Our strategy was to launch with a product that was made of much higher quality ingredients, and that dictated the retail price. We made no more margin. 40 to 45% gross margin. 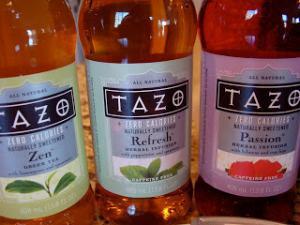 In 1998, Steve Smith and Steve Lee noticed that Starbucks was piloting a brand of tea called Tiazzi, which they perceived as an infringement on the Tazo brand. A polite “cease and desist” letter led to a meeting in which Starbucks offered to buy the Portland company. The sale closed for a reported $9.1 million. Only five years from founding to acquisition. Tazo grew to be a billion dollar brand before being replaced by another Starbuck’s brand, Teavana.

JF: So at that point you had the exit that every entrepreneur dreams of. You could have done anything… What drove you to start all over again?

SL: That’s what I do. My forte is getting things started that inspire and motivate me, then surviving through tough times.

JF: (laughing…) That’s your entrepreneurial strategy??? Get it started and then hang on?

SL: Yeah. I’m attracted to esoteric, romantic categories that inspire me. Tea is very romantic. I was very inspired by that first taste of kombucha that I had in Russia.

SL: The first domestic commercial kombucha that I knew of was a brand called Oocha Brew, here in Portland, that started in 94. That was before GT Dave. I was ready to invest in their company. Unfortunately for Oocha Brew, they learned very fast that when you create a raw kombucha you have to be very careful… If it’s not handled properly all the way through the distribution channels to the store and all the way home into the fridge there’s a high risk of being too high in alcohol. In 1998 they sold a large quantity to QFC stores and the bottles all started exploding. The caps were coming off. That was enough to bankrupt them.

SL: GT Dave began in ’95, grew very slowly until he got some funding in 2003. At that point, Synergy quickly became #1 in the kombucha world with a raw product, and he never looked back.

We started developing Kombucha Wonder Drink in 1999 and launched in 2001. We had a lot of confidence then too, because all the retailers that I talked with said, “oh yeah, if you do kombucha we’re all over it.” So getting it in the stores was easy for us, but moving it off the shelves proved very difficult at first. What we discovered was, even natural foods consumers didn’t know what it was. We did a lot of sampling, and it was a real love/hate thing. Some people would just gag.

SL: Yes. Even though our product was a little more palatable than some. Even now, less than 10% of American consumers are aware of what kombucha is. So it still has a long way to go among the so-called “early adopters.”

We determined from the very beginning that the way to go was shelf stable. Our premise is, most all the benefits of kombucha are in the acids. Those are not affected by pasteurization. But in two years time, in 2003, we were still struggling with consumers accepting the taste. It was a slow process. 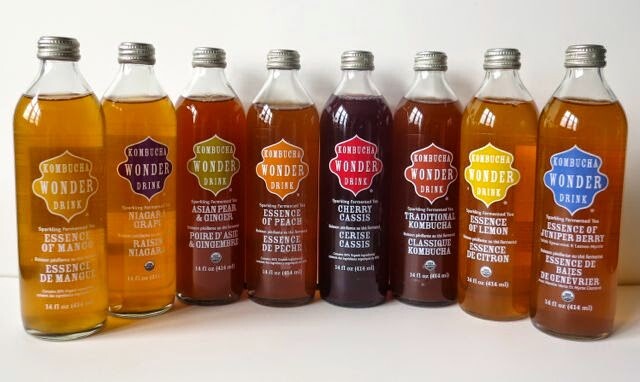 JF: Was that a strategic error, not doing raw kombucha? Were you kickin’ yourself then?

SL: There was a five year period there of self doubt and struggle. We grew every year, but it was not like what was happening in the raw segment. The two other founders left… Didn’t want to do it anymore because the kombucha market wasn’t growing like it had with Tazo or Stash.

We thought we saw the market, but it was tougher than we expected. Then in 2010 there was the mother of all recalls, when all unpasteurized kombucha brands got yanked off the shelves. Even Honest Tea had a raw kombucha that got recalled. CocaCola had a 1/3 interest in Honest Tea at the time, but they had no interest in doing anything with raw kombucha, so they just let it die. It never returned.

In order to get back on the shelves Synergy and all of them had to change the way they made their kombucha. They had to filter out most of the bacteria and prove that they wouldn’t exceed the .5% alcohol limit. We never had a problem with that, with our brand.

JF: So where’s it going now? In Oregon the kombucha market seems to be booming… every time your turn around it seems like there’s a new brand of kombucha popping up. You have Brew Dr., Eva’s, Hmmm, Lion Heart, and dozens of others just in Oregon. Pepsi bought Kevita. Coke’s investment arm has an interest in at least one kombucha company… 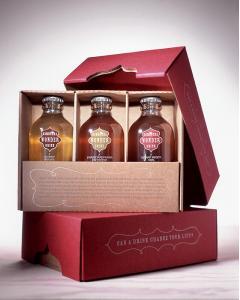 SL: Our trade association, Kombucha Brewers International has 80 members. And that’s not all… there are well over 100 brands. It’s an easy product for people to launch. You can brew kombucha in your kitchen, go to a couple farmer’s markets, become enthusiastic, find and a couple local stores, and you’re in business.

JF: Sure, the kombucha market is booming, so it’s easy to launch. But it’s not, necessarily, easy to succeed in. Just because they can brew it doesn’t mean they can build a brand, like you did.

SL: That’s true. It’s too hard for too many people.

JF: Even now that’s it’s a $600 million market it’s a relatively small pie. I’m sure it’ll get to a billion dollars soon enough, and it’s going to continue to grow, but the question is, is it growing fast enough to support all the new competitors who are jumping into it?

SL: The answer is no. But time will tell. Everything’s going to happen in kombucha market. Everyone is going to experiment and there will be every form and flavor possible. But there’s always a falling out of brands. Phenomenon or not, only five out of 100 startups make it. The shakeout is happening simultaneously as more brands are launched.

But Steven Lee has launched his last company. His future now is in writing. He recently wrote a book about kombucha for Random House, and he plans to use those connections to do something else that inspires him. Something romantic.

If you’re thinking about entering the Kombucha Market or if you have an existing natural foods company, BNBranding can provide all the insight and creative inspiration you need. Call me. 541-815-0075.  Or view our natural foods portfolio.

Kombucha is experiencing a surge in sales and becomes very popular in the world of tea business and therefore the marketing for kombucha tea products becomes a crucial task and it is difficult to maintain its marketing. Hiring a professional digital marketer that offers branding for kombucha services will make it easy for you to increase your sales