From underdog to big dog: Take-aways from the Nike brand narrative.

There’s nothing like a good origin story to remind everyone what your brand’s really all about.  Phil Knight’s memoir, Shoe Dog, is an exceptional example.

Like all good stories, it has plenty of interesting characters, plot twists and emotional ups and downs. Phil Knight wasn’t always the stadium-building billionaire that he is today. For a long time he was just a struggling small-business bean counter, trying to scrape out a living and stay afloat.

The early history of Nike shows how the brand narrative got off track. Knight didn’t really understand marketing or the consumer.

In those early days Knight wasn’t thinking about “building a brand.” It was about paying the bills and getting the bankers off his back. It was a constant juggling act – making payroll, paying for their next shipment of shoes, and paying the bank. I suspect the struggles of his first ten years were slightly exaggerated for effect, but there’s no doubt he had cash flow struggles. 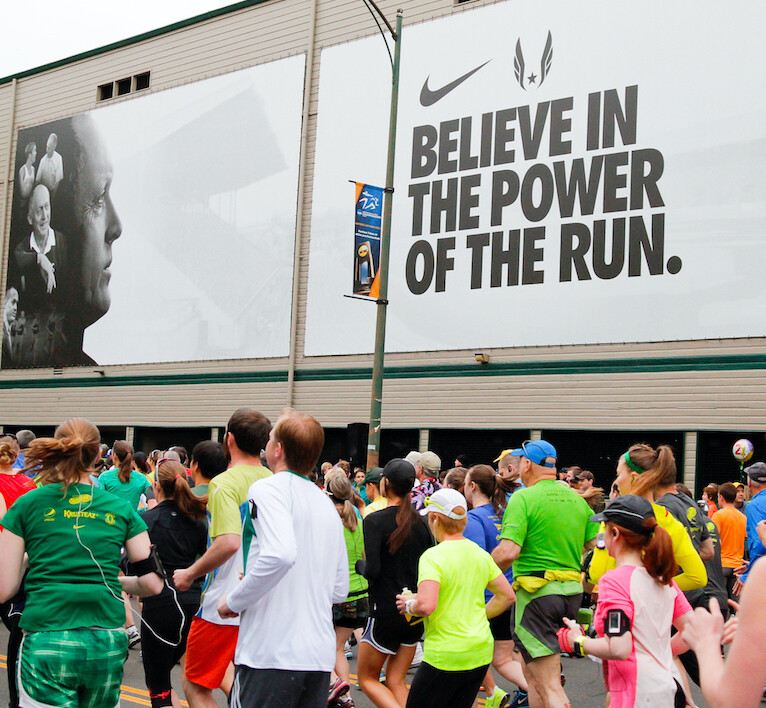 So Knight was out there, schlepping shoes at every track meet and fun run on the west coast. He gave shoes to any athlete or coach who would take them. It was a grass-roots effort that paid off handsomely years later.

Knight did it because he was a runner who genuinely believed he could make life better for other runners.

That was the WHY behind the Nike brand narrative: Enable athletes to run faster, prevent injuries, and quite frankly, win.

Competitiveness is in Knight’s DNA. That’s the core of the Nike brand personality.

Nike was a little company from the little state of Oregon, full of non-conformists who were trying to upset the big, traditional leader; Adidas.

Knight admits to having “an unhealthy contempt” for Adidas and couldn’t bare the thought of losing to them.

Yes, even giants like Nike are underdog brands at some point.

Even though I’ve only owned two pairs of Nikes in my life, I still feel some a connection to the brand. Probably because I grew up in Portland, Oregon in the 1970’s. Nike was everywhere!

Many of our beloved Portland Trailblazers wore Nikes.

When I ran track in high school I wore Adidas, but I wanted Nikes. (Alas, no brand of shoe was magical enough to lift my short-legged self to any great heights in that arena.)

Nike shoes were a status symbol and a fashion statement in high school. The Converse brand was fading, and all the cool, rich  kids wore Nikes. Later, when I was starting my career in advertising, Nike was THE brand that every ad agency in Portland wanted. Only the cool kids at Weiden & Kennedy got to work on that treasured account.

So I’ve admired, followed and studied Nike since its inception. And in hindsight, I see three things:

Relevance, credibility and differentiation. Those three elements are woven into every chapter of Nike’s brand narrative.  Those are the common elements of all great brands. That’s what elevated Nike from underdog to big dog status.

Credibility of the Nike brand narrative.

Phil Knight never had to worry about credibility in the track world. He had Bill Bowerman, the greatest track coach on earth, as his partner. Bowerman coached the 1972 Olympic track and field team. He invented the waffle sole.

They were really good shoes, and all the athletes knew it. So it was easy for Knight and his team to recruit athletes to wear them.

That’s where brand credibility starts; With a good product.  Nike leveraged that product cred in order to land iconic athletes, who in turn raised the brand’s credibility even further.

Expanding the relevance of the Nike brand narrative.

With every new athlete came more credibility and broadening relevance.

However, the Nike brand narrative in those early days spoke only to the top performers. It wasn’t so relevant to the general public outside of Portland, Oregon.

In a 1992 interview for Harvard Business Review, Knight reflected on their early messaging missteps:

“When we started making shoes for basketball, tennis, and football, we did essentially the same thing we had done in running. It was effective—to a point. But we were missing something,” Knight said.

“We understood our “core consumers,” the athletes who were performing at the highest level of the sport. Everything was aimed at them. We said, if we get the people at the top, we’ll get the others. But that was an oversimplification. Sure, it’s important to get the top of the pyramid, but you’ve also got to speak to the people all the way down.”

Michael Jordon made Nike relevant not only on the basketball court, but on urban streets, as well. Air Jordan, Nike’s sub-brand,  is still  the best selling brand of athletic shoes of all time.

When Nike went public in 1980 Phil Knight’s financial struggles were over. But the company made two gigantic blunders that would hamper growth for most of the decade.

First, Nike went completely off script and tried to enter the casual shoe market. It was a classic line extension blunder that was completely off brand and doomed to fail. Knight called it disastrous.

Nothing Nike could ever say would make it a relevant brand in casual shoes.

“Not only was the casual shoe effort a failure, but it was diluting our trademark and hurting us in running,” Knight said.

“From the start, everybody understood that Nike was a running shoe company, and the brand stood for excellence in track and field. It was a very clear message, and Nike was very successful. But casual shoes sent a different message. People got confused, and Nike began to lose its magic.”

“That whole experience forced us to define what the Nike brand really meant, and it taught us the importance of focus. Without focus, the whole brand is at risk. Just because you have the best athletes in the world and a stripe everybody recognizes doesn’t mean you can take that trademark to the ends of the earth.”

At the same time, the Nike team completely miscalculated the booming aerobics market. Reebok came from nowhere and kicked Nike’s butt. Nike was built on very specific product niches, with a siloed culture, and no one at Nike took that trend seriously.

Nike was irrelevant to millions of women at that time. 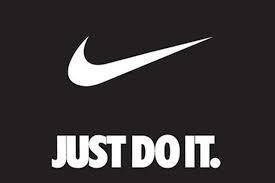 Three words that change the world.

It wasn’t until the first Just Do It commercials ran in 1988 that the Nike Brand began to emerge as something much bigger than just product features and demigods of professional sports.

When they finally got the words right, the relevance of the brand narrative exploded.  (And it didn’t hurt that they had Michael Jordan, on the team.)

Scott Bedbury, Nike’s Director of Corporate Advertising at that time says  “Just Do It” codified an ethos that had always existed within the Nike Brand.

“Those three words simultaneously helped us widen and unify the brand,” Bedbury said. I’d say, it was the essence of the brand personality, summed up in eight letters.

‘Just Do It’ possessed as much relevance for a 50-year-old mall walker as it did for a 20 year old triathlete. While each spot was intriguing as a stand-alone, the juxtaposition of the entire campaign transmitted a higher, more noble purpose.

“For years, we put all our emphasis on designing and manufacturing the products. But now we understand that the most important thing we do is market the product. We’ve come around to saying that Nike is a marketing-oriented company, and the product is our most important marketing tool.”

So they began to differentiate Nike with their advertising, as well as with their products.

First there was Walt Stack, an 80-year-old toothless runner, in the original “just do it” commercial.

Michael Jordan in a Superbowl spot with Bugs Bunny.

Bo Jackson and Bo Diddly together in the “Bo Knows” commercial.

Later there was Tiger Woods, saying “Hello World, are you ready for me?”

Serena Williams, saying “Show them what crazy can do.”

And, of course, Colin Kaepernick saying “Believe in something. Even if it means giving up everything.”

“The trick is to get athletes who not only can win but can stir up emotion. We want someone the public is going to love or hate, not just the leading scorer.” Knight said.

Knight’s athlete strategy certainly has caused some backlash over the years. But while some people were burning shoes, the Nike brand was standing out, and winning the race in the long run.

Lessons learned from 30 years in a professional services business

Branding the Olympics – leading by example in sports marketing