2 What marketers can learn from the Olympics — Branding and the Olympic Rings.

I’m a big fan of the Winter Olympics. I got hooked as a boy when Franz Klammer made his infamous, gold medal downhill run at the Innsbruck Games, and I’ve been watching ever since. I’ve even watched some of the curling and ice dancing (yikes). 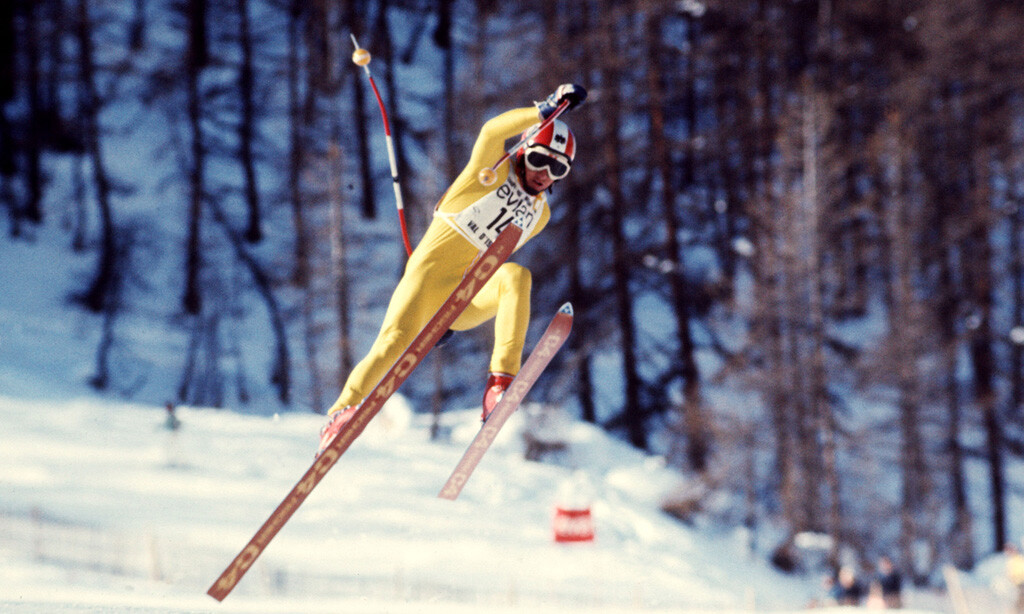 Franz Klammer on the edge of disaster.

The summer games are fun too, but they don’t have the thrill-factor of the winter games. Crews rowing in a straight line just isn’t as exciting to watch as downhill skiing. And a diver doing a twisting three-and-a-half into a pool just isn’t as edgy as a guy on skis doing a triple flip with five twists.

But the Games are always inspiring, and for marketers, there’s a lot to learn from the Olympics. It’s one of the greatest branding case studies of all time.

Every two years there’s a massive new event to be planned, a venue to be marketed and a sub-brand to be designed. The Olympic rings are the enduring anchor.

There have been plenty of unfortunate mishaps in the Olympics over the years… Terrorism in Munich in 1972. The Soviet boycott of the Los Angeles games in 1984. The Tanya Harding thing in 92. A bomb explosion in Atlanta in 1996. In 2010 the Vancouver Games started on a with a fatal crash in during luge training. And now, for the first time, a complete postponement thanks to COVID 19.

The Summer Games will be back next year, and

But every time the games suffer a set-back, the Olympic brand bounces back stronger than ever. The brand  is perched on such a high pedestal around the world, it’s almost bullet proof.

Here’s an example: In 1995, the IOC awarded Salt Lake City the Winter Games for 2002.  As it turned out, the decision was fixed. IOC members had taken millions of dollars in bribe money. As a result, the top leaders of the Salt Lake Olympic Committee resigned. Ten members of the IOC were expelled and 10 more were sanctioned.

But the Olympics rose above the fray. By the time the Salt Lake Games commenced, the scandal was all but forgotten. Organizers actually raised the price of corporate sponsorships 30 percent.

In the last 20 years the price tag for an Olympic sponsorship has risen dramatically. NBC paid $775 million for the Sochi games alone, $4.38 Billion for the Olympic broadcast rights through 2020.

The summer games in Rio boasted more than 1,500 hours of coverage across six NBCUniversal platforms (NBC, NBCSN, CNBC, MSNBC, USA Network and NBC Olympics.com) and more than 1,000 hours of live streaming coverage. Visa paid $65 million dollars just for the privilege of associating the brand with the Olympic rings for four years.

No other sporting event commands that kind of attention in the corporate marketing world. You could argue it’s the most desirable brand affiliation on earth. Companies are clamoring to hang their hats on those Olympic Rings.

Why? Because the Olympic brand represents something that goes way beyond athletic competition. It’s the intangible “spirit of the games” that makes it riveting for the audience, and desirable to the corporate world.

Every Olympic Games is filled with real-life stories of triumph and tragedy. Every night for two weeks there are new characters, new story lines, new scenic backdrops, new drama. It’s heroes and underdogs, great feats of strength and stamina juxtaposed with delicate dance moves and tears of joy.

As the San Jose Mercury News put it, “it’s the ultimate reality show.” And we eat it up. It’s human nature. It’s a two-week event, every other year, that has all the components of great brands: 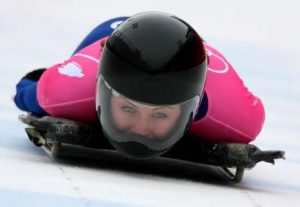 • The Olympics are authentic and unscripted.

At the Olympics you find ordinary people pursuing their favorite sports, not for the hundred million-dollar endorsement deals, but for the pure sense of personal accomplishment. Especially in the winter games. (Even in Canada there can’t be much money in curling.) There are track athletes who switch to Bobsled in the winter, just to have a chance at achieving their dream of competing in the Olympics.

The authenticity is obvious in post-event interviews… The athletes are less rehearsed and obviously passionate about their sports, and about the Olympics. You don’t get those canned, banal responses like you do in the NBA. For instance, Lindsey Vonn was riveting after her win in Vancouver. And Ashton Eaton, after his follow-up win in the Decathalon.

And when it comes to PR damage control, the IOC has handles things pretty well. When Olympic officials went on TV to face questions about the luge incident in Vancouver, the tears were genuinely heartwrenching. No spin whatsoever.

Corporate America could learn a thing or two.

• The Olympics are dramatically different.

Most notably, the Olympics are less commercial than other mega-events like the Superbowl or the soccer World Cup.

There’s no on-field branding allowed in the Olympics. Even though they paid $65 million, you’ll never see a giant VISA banner hung behind the medals stand or along the boards in the figure skating arena. And the athletes aren’t plastered with logos, ala-Nascar.

At The Games, the Olympic brand always takes precedent over any other type of branding, personal or corporate. So even when you have NHL and NBA stars competing in the Olympics, it’s not about them or their sponsors. It’s about The Games. 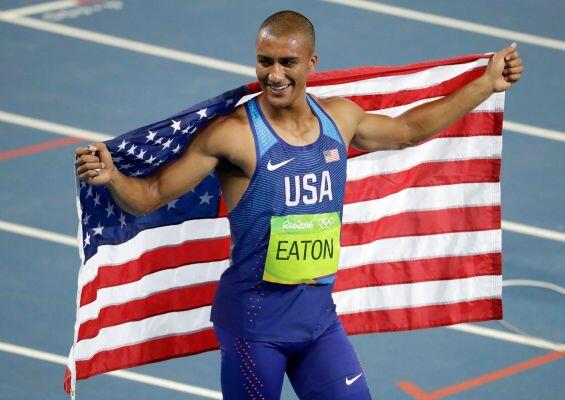 The competitors even take an oath. They swear to uphold the tenets of the Olympic Charter and willingly pee in a cup after every event. They are required to put their own, personal gains aside for two weeks and compete for their countries “in the spirit of friendship and fair play.”

It may seem a little cheesy, a little old fashioned, but that’s a central element of the Olympic brand. It’s still relatively pure.

• The Olympics have remained relevant for more than 100 years.

The characters change and individual events evolve, but at The Olympics the narrative remain consistent:  Lifelong dreams of glory. National pride. Individual triumph of the underdog.

With the fragmentation of TV viewing, live sporting events are becoming more and more important to the networks. And there’s something uniquely compelling about obscure sports that you’ve never tried, and that you only see during the Olympics…

Ski as fast as you can — cross country— then stop, drop and shoot. Plunge head first down an icy, serpentine track on a “Skeleton” sled, at 70 miles per hour. This isn’t Little League or typical, suburban soccer mom stuff.

For people who never ski it’s hard to appreciate the technical nuances of traditional, alpine ski racing. Same can be said for the skating events… The general public has no concept of the difficulty and physical demands of a 4-minute figure skating program. It looks too easy. Even though most people can’t relate, they still watch.

The Vancouver Olympics drew massive television audiences, even beating out American Idol in the Neilson ratings. Almost 35 million Americans tuned in to the last part of the gold medal hockey game. And in Canada, 80% of the population watched at least part of that game.

And hockey wasn’t the only big draw. Overall ratings of the Vancouver Games in the U.S. were up 25 percent over the 2006 games in Torino. That year, snowboarding, skier-cross and short track speed skating helped bring in record audiences among the 12 to 24 year-old demographic. In the Sochi games they added even more events designed to appeal to the younger demographic, including  a half pipe competition for skiers and snowboarders as well as women’s ski jumping. In 2018 they’re adding the big air competition, which competes directly with the XGames.

• The brand is way more than a mark.

Five, multi-colored, interlocking rings. That’s the official mark of the games that dates back to 1920. As the Olympic Charter states, the rings “represent the union of the five continents and the meeting of athletes from throughout the world at the Olympic Games.”

That’s the literal interpretation of the Olympic logo. But it goes much deeper than that.

You’ll often hear brand managers and consultants talking about “core brand values” and the underlying meaning of great brands. Well, the Olympic Brand means much more than just medal counts and TV ratings. It’s not just winners and losers. It’s national pride and the triumph of the human spirit.

What you can learn from the Olympics is to define your own narrative and then stick with it.

When you watch the Olympics and get sucked into the story lines, you’ll see what I mean. In this age of Red Bull events and the XGames, maybe the Winter Games aren’t as relevant as they once were. But we’ll see. I’m betting that it will continue to inspire audiences. Just as I was enthralled with Franz Klammer, a whole new generation will be inspired by the latest Olympic athletes.

For more marketing lessons on brand credibility, try this post on the Brand Insight Blog.